Massive gas leak explosion in the neighborhood this morning

As I write this there are many helicopters flying overhead nearby. There was a large gas leak explosion this morning at about 1:30 over on Greenwood Av between 85th and 83rd about a half mile from our house. Reports say that three businesses are gone. Neptune Coffee, Mr. Gyros and the Quikstop Convenience Store on the west side of the street. There were no serious injuries or deaths reported. A few firefighters were taken to the hospital with minor injuries.

A reddit thread reports that the Angry Beaver (a hockey bar) across the street had its windows blown out and took heavy damage. It also reports that the Gordito’s restaurant on 85th was damaged. I heard the owner of the Couth Buzzard bookstore on the radio this morning who reported his windows were blown out as well. [ed. Also Chocolati, Diggity Dog, the Tattoo parlor on 85th, all around the corner up and down the street]

My next door neighbor told me she got woken up by the explosion. Neither Laura or I woke up though I sort of half remember in retrospect hearing lots of sirens.

Mr. Gyros will be the biggest loss for me. The owner, Sammy is a friend and a member of my fantasy football league. (he was this winner of the league this year so I suspect the trophy was lost in the explosion). Sammy is a highly loved and respected member of the local business community. He knows most of his customers by name and I go there for lunch fairly often. He and his brother Joni have another location in Ballard but if I know them, they will rebuild the place in Greenwood.

I’ll try to go by the location later today and take some photos which I will post here. I’m just happy nobody was seriously injured. Something like half a city block was flattened.

Here are some links to local news reports

A natural gas leak may have caused a massive explosion early Wednesday in Seattle's Greenwood neighborhood -- obliterating at least one building, damaging many others and sending nine firefighters to the hospital. 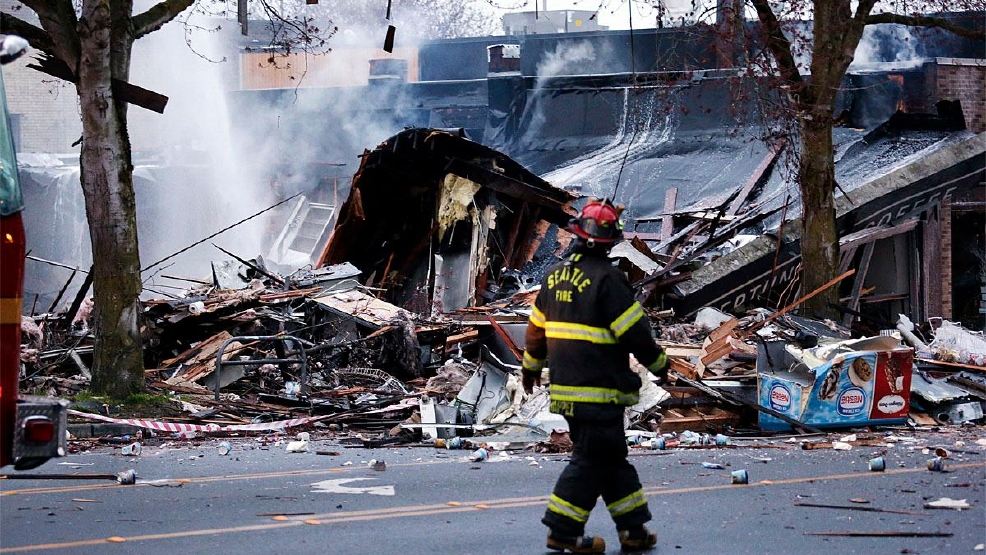 SEATTLE -- A natural gas explosion rocked a Seattle neighborhood early Wednesday, sending nine firefighters to the hospital and reducing businesses to rubble.Crews were responding to reports of a natural gas leak when the explosion happened along the...

SEATTLE -- A natural gas explosion rocked a Seattle neighborhood early Wednesday, sending nine firefighters to the hospital and reducing businesses to rubble.Crews were responding to reports of a natural gas leak when the explosion happened along the...

The aerial photos are jaw dropping.

I had a look around the scene over lunch. Here are some photos I took. Looking South down Greenwood from 87th I talked to many people who heard it who live farther away than I do. One woman I talked to lives on the corner of 85th and Greenwood in the apartments above the Lodge. She had just gone to bed after looking at the fire truck that arrived to check the gas leak before the explosion.

It’s been over 6 months but they have finally come out with a report on the cause of the gas explosion. The Phinneywood blog site has the report

The actual report is here

tl;dr version
PSE is at fault for not closing off a gas line that ran between Mr. Gyros and the Neptune coffee shop. Some people were storing “personal items” in-between the buildings and they probably ruptured the line.

Today is the one-year anniversary of the explosion.

Everything looks like it’s pretty much back to normal but a number of the businesses in the area never recovered.