I’ve been anticipating this day for at least two years, probably more. As I sit here at my keyboard I can scarcely believe what I saw for a couple of minutes this morning. I attended a lecture at the UW last week by avid eclipse chaser Stephen O’Meara who told us,

This is about as close to a correct assessment as I can imagine.

Our adventure took place in Fossil, Oregon on the northern edge of the totality zone in Central Oregon. My friends Matt and Kelly who live in Bend Oregon (just south of the totality zone) discovered this place last April while visiting for their anniversary. Fossil is so named because it lies in the midst of the John Day Fossil Beds, which is well worth a visit if you have any interest in archeology. Matt and Kelly discovered that the Fossil high school was offering 20x20 plots on the football field for tent camping. It promised to be a bit less crazy than the larger events in Madras and Prineville to the southwest.

Going into the weekend my biggest two worries were traffic and weather. Since around half of the US population was within a day’s travel of the totality zone and this part of the country was the most likely to have clear skies, everyone anticipated large crowds and lots of traffic. The news on Thursday didn’t inspire confidence on the traffic front. There were reports of massive backups on the roads. We left Seattle at about 3:30 am on Saturday the 19th not knowing what to expect exactly. We packed large amounts of water, extra fuel and enough provisions for a 3 day backpacking/car camping trip.

I was relieved that we ended up having no issues at all. We arrived in Fossil at around 9:00 am with no traffic problems. As we traveled east across the Cascades the cloudy Seattle skies gave way to clearing. At Ellensburg, the skies were clear enough for us to catch a view of the waning moon and the planet Venus hanging in the dawn skies.
We were about the 3rd or 4th party to arrive so we got a nice location for our camp on the football field. There was a hill behind our tent that is a fossil bed. They provided rock hammers so you could go up there and look around. There were people up there the entire weekend hacking at the hillside looking for fossils at all hours The town was very nice and they really rolled out the red carpet for us strangers. We were able to get any provisions we needed at the general store and didn’t need our backpacking food at all. We were pleasantly over-prepared. We attended a lecture by a real astronomer Dr. Ian McGreer who as it turns out was a graduate of the very high school we were staying at. I had a good time talking with him afterwards about his area of research (quasars and other distant objects).

We spent Sunday wandering around town. By the afternoon the tent camp was starting to fill in The town has a fossil museum and an more general old time artifacts museum and the main street had been blocked off and set up with food and various arts and crafts booths. In the evening there was a big BBQ at the elementary school. This is where my second worry came in; the weather. The clouds rolled in all Sunday afternoon and it was quite overcast by the time we went to dinner. It had been clear up until then so it was a bit concerning.

The weather forecast kept insisting that it was going to clear up though and sure enough as the sun started to set the tops of the surrounding hills lit up and we had a stunning sunset. We also had reports of the forest fires west of us that had the potential to send smoke towards us. It all made for some nervousness, but we never saw any smoke. I got up in the middle of the night and was greeted with a perfectly clear night sky.

The day of the eclipse, I got up early (thanks to a car alarm going off at 6:00 am) and walked around scouting locations to watch. We had our pancake breakfast in the gym and then I set up a sun viewer. It was a normal pair of binoculars which projected the image of the sun on a screen below. I put a cardboard shade with a couple of holes cut out to create more contrast. I just had to adjust it every so often as the sun moved but it worked pretty well I saw the first bite out of the sun right at 9:08 as predicted. We watched the shadow eat up the sun for an hour There were some clouds gathering on the southern horizon that were a bit worrisome. At about 10, I removed my binoculars and moved up the hill for the big totality event. It was noticeably cooler at this point and the sky and the surroundings looked they way it does when you have sunglasses on even though I wasn’t wearing any. Notice even right before totality it still looks more or less normal out. In addition to the cooler temperatures the shadows were sharper as the light from the sun gets confined to smaller and smaller space.

I had read some conflicting reports about taking photos with a cell phone camera. The worst of these reports said it would ruin the camera. I didn’t really think that was true but I was carrying an old cell phone so I figured I didn’t care what happened to it and so I took a selfie video for the last 3 minutes before totality. I think it’s really cool.


What is happening? This is so weird!

Sorry it cuts off abruptly but as soon as it went total I had to get my binoculars out. Everything went so fast and there were so much to see. The horizon all around was in twilight. Venus stood out nearly on the zenith. I saw Mercury with my binoculars quite close to the sun. I didn’t see Jupiter. I think it was still below the horizon. I also completely forgot to look for Mars.

The corona was as amazing as everyone says. In my binoculars I saw all the red/orange/yellow colors and maybe even a little green. There were three distinct prominences coming out with two along the ecliptic (3 and 9 o’clock) and another at about 1 o’clock. This image from Oregon matches my memory pretty well except I saw color and a shimmery effect. 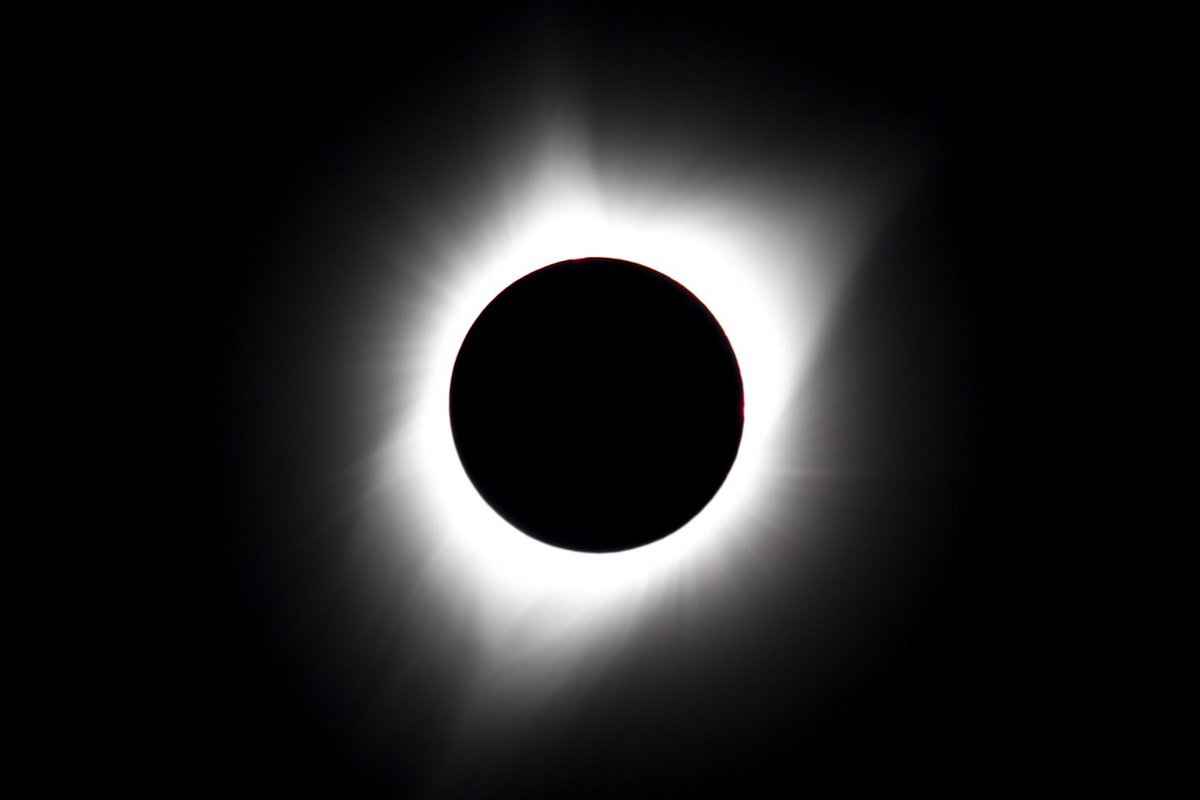 I haven’t yet seen a picture that does justice to it.

If you didn’t see this total eclipse and only maybe saw the partial you might be wondering what the fuss is about. I’ve heard a lot of this kind of talk in the media and on-line. All I can say is that it just took my breath away, it was so beautiful. There is no way to express it. You should think about seeing one for yourself if it is at all possible.

It is so wonderfully strange to look at the sun and see a black dot there in the sky with glowing corona around it and the entire horizon in twilight. The 15 to 20 seconds leading up to totality cannot be captured on video, I think because in most cameras the electronics adjust to the dropping light level and makes it look as if nothing is changing but it’s as if a massive dimmer switch was being cranked down. It gave me this sinking feeling, almost like dread and loss of control even though on an intellectual level I knew what was happening and that there was nothing to fear. It is so far outside your normal realm of experience you don’t have anything to compare it to. You just stare and get overcome with emotion. Maybe you can see a bit of that in me in the video.

It was definitely heightened by sharing the experience with a crowd. Everyone is feeling it and you can feel that too. Similar to the difference between attending a concert and listening to it by yourself on a music playing device.

The darkness comes quick and you look around and look up and so many things are demanding your attention and there’s no time to process anything because your brain is flooding with emotion and weirdness. But before your brain has gotten a chance to accept this new reality it’s gone; about a minute and a half for us. The darkness subsides and in a few seconds everything looks normal again. The euphoria continues though for many minutes following.

The trip back was also uneventful. There were a few traffic backups leaving Fossil and crossing the Columbia river into Washington but otherwise it went without a hitch. Law enforcement was out in force directing traffic and making sure we didn’t speed. All in all a very pleasant trip that was made epic by the inclusion of the eclipse thing. I’ll surely not forget it and am now looking forward to the 2024 event in the eastern US.

[Yes, I think this thing could be addictive.] 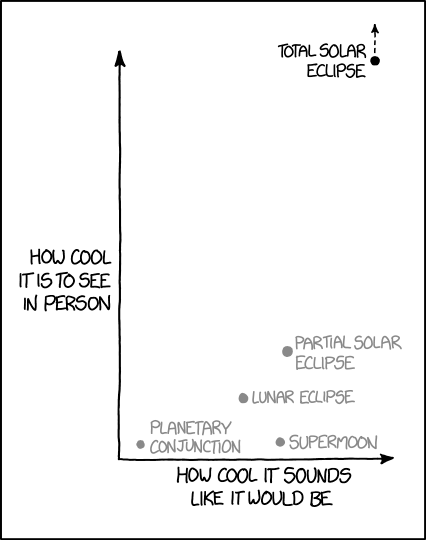 I watched from a beautiful nature reserve in central Missouri, and it was--without exaggeration--the coolest thing I've ever seen.

Created an animated gif of the eclipse video

A nice video from a fellow SAS’er who was in Casper. His pictures match my memory of the corona and the prominences visible during totality.